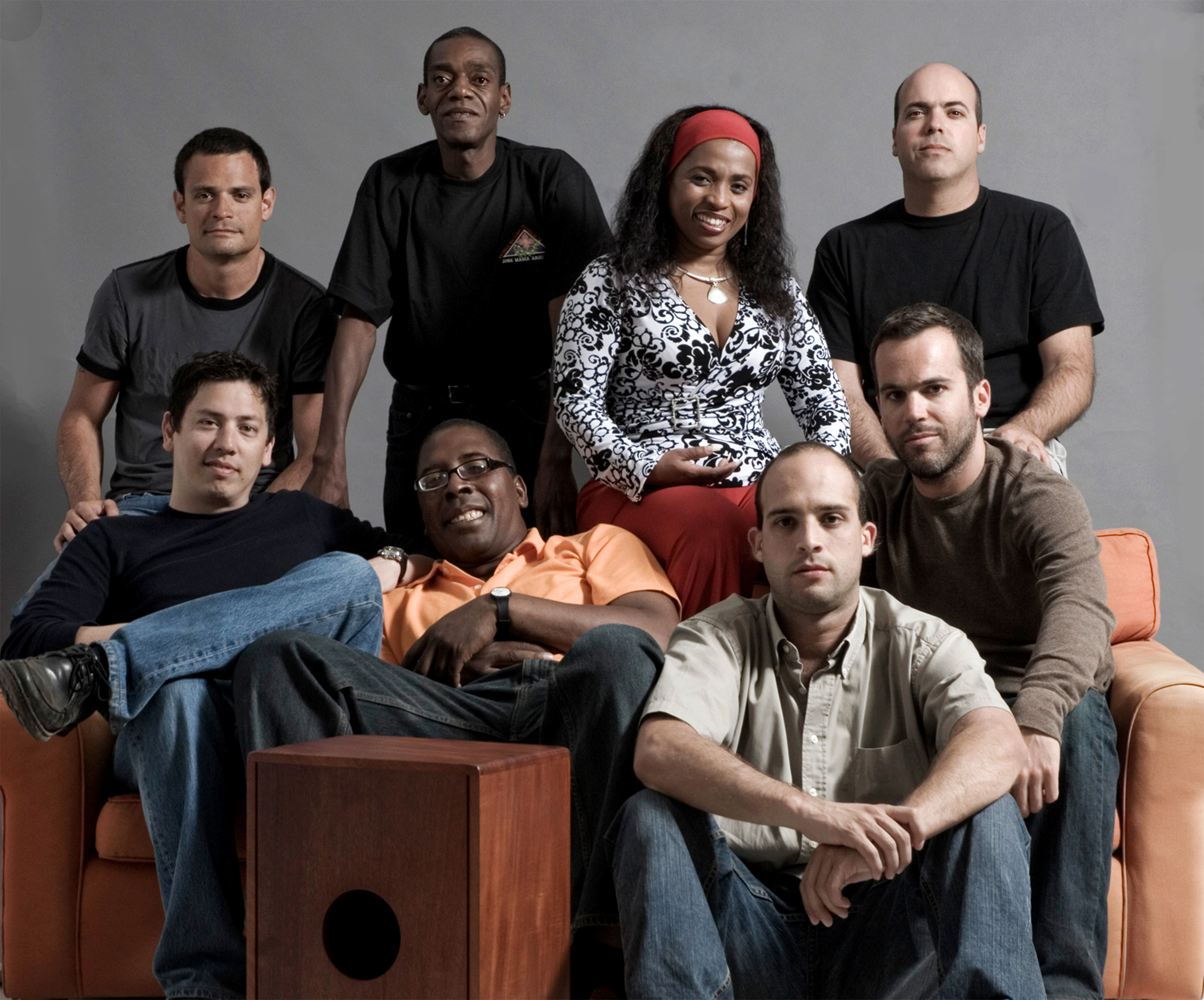 Novalima is a Latin Grammy nominated collective/band which since its formation in 2001, has been breaking down boundaries, uniting seemingly irreconcilable genres, communities and generations to create an inspiring movement that has revolutionized the music scene in their native Peru. Founded by four friends from Lima with a shared passion for both traditional Afro-Peruvian music and modern DJ culture, Novalima searches for the common ground between past and future, between traditionand innovation. Their efforts have also helped bridge the divide between the Peruvian mainstream and the Afro-Peruvian community, a minority population that has struggled against discrimination and the threat of cultural dissolution for generations.

While their sound is futuristic and cutting-edge, the roots of Novalima’s music stretch back hundreds of years to the times of slaveryand Spanish colonial rule. In a far-too-familiar tale, African slaves were brought to Peru as early as the 1500s until the middle of the 19th Century, establishing an outpost of African culture in South America. Over the years, the soul and rhythms of Africa blended with the melodies and instruments of Europe and the Andes. The result is rich musical repertoire that has existed for generations on the periphery of Peruvian popular culture.

In 1995, American pop star David Byrne introduced the world to the treasures of Afro-Peruvian music with a compilation CD entitled The Soul of Black Peru. The collection helped give international recognition to Afro-Peruvian icons Susana Baca, Eva Ayllón, Chabuca Granda, Nicómedes Santa Cruz and others, while sparking a renewed interest back in Peru for a musical scene that had often been overlooked by the broader society.

The founders of Novalima, Ramon Perez-Prieto, Grimaldo Del Solar, Rafael Morales, and Carlos Li Carrillo, became friends while in high school in Lima. The children of artists and intellectuals, Ramon, Grimaldo, Rafael and Carlos were well-educated and well traveled, and while they grew up listening to the popular and folk music of Latin America, they also shared a fascination for rock, pop, reggae, salsa, dance and electronic music.

Indeed, without modern technology, Novalima might not have developed, as the group came together at a time when the four founders were each living in different parts of the world. From their homes in London, Barcelona, Hong Kong and Lima, they started emailing song ideas to each other. These long-distance experiments resulted in their 2002 debut album, the self-titled Novalima.

The reception to the album exceeded their wildest expectations, eventually reaching platinum sales status in Peru, and for their next album they invited more Afro-Peruvian musicians to join their recording sessions. The outcome was Afro, an album that was released worldwide in 2006 to tremendous acclaim and put Novalima on the international music map. The London Metro Evening Standard raved, “Novalima has more than succeeded in bringing the spirit and soul of Peruvian blues into the 21st century.” Afro held the #1 spot on the US College Music Journal Latin Alternative and New World radio charts for ten weeks combined.

The founders of Novalima have since returned to Lima and invited some of their favorite Afro-Peruvian musicians to form the live band: Juan Medrano Cotito, Mangüe Vasquez, Milagros Guerrero and Marcos Mosquera, as well as Alfonso Montesinos and Constantino Alvarez, all renowned local musicians. The partnership between the original cosmopolitan quartet and members of the Afro-Peruvian community has generated a great deal of attention at home, mostly because the divide between black and white in Peru has made these types of collaborations unfortunately rare. A January 2008 article in the Christian Science Monitor focused on the ways in which Novalima was introducing a new generation to Afro-Peruvian culture, asserting, “By updating traditional black music, Novalima is bridging racial divides inside Peru.” While this social impact was not necessarily their intention at the outset, the members of Novalima cherish the uncommon friendships that have developed through playing music with people of different ethnic and economic backgrounds.

On their 2009 album, Coba Coba, Novalima expanded on the critically-acclaimed formula they developed with their two previous recordings, while taking their inspiring fusion in newand exciting directions. The album’s title is derived from an Afro-Peruvian expression used to incite musicians, much like shouting “Go for it!” or “Take it!” to a musician in the midst of a great solo.

On Coba Coba, Novalima delved further into the African roots of Afro-Peruvian music, bringing in influences from its musical cousins reggae, dub, salsa, hip-hop, afrobeat and Cuban son. They took a more organic approach with the songs more accurately reflecting the live sound of the band, thanks to time spent working together as an actual band rather than a studio project. British producer Toni Economides, a regular collaborator of Nitin Sawhney, Da Lata, Bugz in the Attic and 4Hero among others, added his special touch to the album’s mixes. The result is a modern approach to Afro- Peruvian music that has made the genre accessible to a younger and wider public.

The album gave novalima a Latin Grammy nomination for best Latin alternative Album in 2009, and reached number 1 spots on USA CMJ Radio charts, as well as in Canada and European World Music Charts. The success of Novalima’s approach was never more evident than during a recent monumental concert in the main public square of Lima. Performing in front of a pulsating crowd of more than 30,000 people, Novalima presented their new vision of Afro-Peruvian music to an astounded an appreciative audience who knew they were witnessing history in the making.

In 2011, novalima signed with ESL Music, the label owned by Thievery Corporation, to release “Karimba” its new production, in January 2012.
Karimba promises to bring even wider recognition to this innovative group, while furthering their mission to inspire new generations to appreciate and respect the Afro-Peruvian contribution to the world of music. With a fresh and innovative sound that stands on a centuries-old foundation of soul and heritage, Novalima promises to keep Afro-Peruvian expression thriving long into the future.